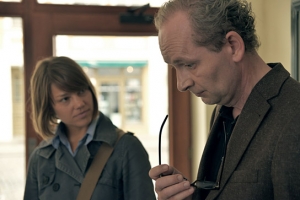 Ferdinand von Schirach, born in Munich in 1964, studied law in Bonn before settling in Berlin in 1994 as a lawyer specialising in criminal law. His clients included among others the BND (German Federal Intelligence Service) spy Norbert Juretzko and the East German politician Günter Schabowski in the Mauerschützen Trials.

In addition to his professional activities as a lawyer, from 2009 onwards von Schirach wrote short stories, published among others in the books "Crime" (2009) and "Guilt" (2010), and later also novels ("The Collini Case", 2011 and "The Girl Who Wasn't There", 2013), all of which soon reached an audience of millions and were translated into over 40 languages. Most of his literary works deal with legal cases, some of which are directly related to his everyday life as a lawyer.

In 2015, his first theatre play "Terror" premiered at the Deutsches Theater Berlin and the Schauspiel Frankfurt simultaneously, attracting a great deal of media attention. After performances on many other national and international stages, it is now counted among the most successful contemporary German plays.

Based on his books, a number of film and television productions were released in recent years, including highly acclaimed mini-series such as "Verbrechen nach Ferdinand von Schirach" ("Crime Stories"), nominated for the Grimme Prize in 2014, and "Schuld nach Ferdinand von Schirach" ("Shades of Guilt") with Moritz Bleibtreu in the leading role. German, Austrian and Swiss public broadcasters ARD, ORF and SRF realised the TV experiment "Terror - Ihr Urteil" ("The Verdict"), which gave the audience the opportunity to vote during the broadcast. Lars Kraume was awarded the German Television Award 2017 in the category Best Director for his achievement.

In 2018 Detlev Bucks "Asphaltgorillas", which is based on a short story from the band "Schuld", was released in German cinemas, one year later followed by Marco Kreutzpaintner's "Der Fall Collini" ("The Collini Case") with Elyas M'Barek and Franco Nero in the leading roles.

In small roles, Franz von Schirach himself appeared in front of the camera, playing alongside Inga Busch and Detlev Buck in Bernadette Knollers' graduation film "Ferien" (2016) as well as in "Wuff - Folge dem Hund" (2018), Detlev Buck's comedy about a group of city dwellers whose lives and relationships are influenced by their four-legged friends.

Schirach has won several national and international literary awards, including the Kleist Prize in 2010 and the Ricarda Huch Prize in 2018.