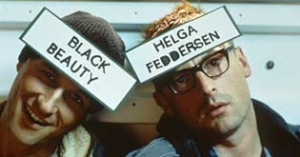 Hoffi is naive and a real talker. His friend Lemmi doesn′t have a tongue in his head. They′re as different as you can be, but that doesn′t spoil their friendship. One day they wake up among - of all places - water buffaloes in the zoo instead of in their own beds. That doesn′t faze them, though.

The orderly lives of their fellow creatures isn′t their cup of tea anyway.

What′s much worse is that Hoffi has set his mind on organizing a birthday present for his sister - this on such a great summer day, which should be spent lying in the park with a couple of six-packs for company. So the lovable, chaotic friends set out on an odyssey through the city. At the end of this quest they lose sight of the birthday present, but each of them finds himself the woman of his dreams.