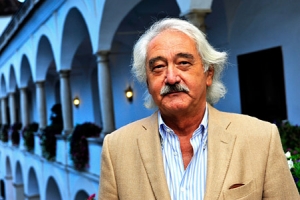 Franz Xaver Schwarzenberger was born in Vienna on April 21, 1946. He trained as a repro-photographer before becoming a trainee cameraman for TV. At the beginning of the 1970s he became a regular cameraman mainly for television. He teamed up with director Axel Corti to shoot the documentary-style feature "Ein junger Mann aus dem Innviertel" (AT 1973) about the early years of Adolf Hitler, the celebrated Austrian miniseries "Die Alpensaga" (1976-1978) and the legendary "Tatort" episode "Wohnheim Westendstraße" (1976).

His first collaboration with Rainer Werner Fassbinder in the miniseries "Berlin Alexanderplatz" (1980) caused a controversy as Schwarzenberger's pictures were regarded as "too dark" for television. Today, the films he made with Fassbinder until the latter died are considered seminal works: the dark and melancholic "Lili Marleen" (1980), the candy-colored "Lola" (1981), the very stylized and almost dream-like "Querelle – Ein Pakt mit dem Teufel" (1982) and the black-and-white "Die Sehnsucht der Veronika Voss" for which Schwarzenberger was awarded the Deutscher Kamerapreis. With Fassbinder not at the helm but as a lead he then shot the sci-fi thriller "Kamikaze 1989" (1982, d.: Wolf Gremm). He also worked in France, photographing superstar Jean-Paul Belmondo in the highly successful action comedy "L'as des as" ("Ace of Aces", 1982) and the thriller "Le marginal" ("The Outsider", 1983).

Xaver Schwarzenberger then debuted as a director with "Der stille Ozean" (AT/DE 1983) a TV feature about a young physician who secludes himself to a mountain village after fatal medical malpractice. The film screened in the Berlin IFF's competition in 1983 and won a Silver Bear for Outstanding Artistic Contribution. It also won the C.I.C.A.E. award as well as the OCIC Award and garnered Schwarzenberger his second Deutscher Kamerapreis.

His second feature as a director, "Donauwalzer" (AT/DE 1984, TV), written by his wife Ulrike Schwarzenberger, also received critical praise and won various awards. The drama about a Hungarian woman who, after 20 years, finds her long-lost lover to be alive, was awarded the Bronze Leopard at the Locarno IFF as well as two Bavarian Film Awards (Best Directing and Best Cinematography). In the following years, Schwarzenberger both helmed and photographed most of his movies. The low-brow comedies "Otto – der Film" (1985; co-directed by Otto Waalkes) and its sequel "Otto – Der neue Film" (1987; again co-directed by Waalkes) as well as the adaptation of the bestselling novel "Beim nächsten Mann wird alles anders" (1988) turned out box office hits. His work as DoP for other directors included the Loriot comedy "Ödipussi" (1988) which he shot in sober images and Helmut Dietl's satire "Schtonk!" (1992) which sported a more elegant and smooth look.

His mainstay, however, were the films written by his wife Ulrike which he both photographed and directed himself. He received his third Deutscher Kamerapreis for the made-for-TV drama "Absturz" (1990) about the sad fate of an 18-year-old prostitute. Over the course of the 1990s he continued to work almost exclusively for German or Austrian TV. His most important works include the crime comedy "Duett" (AT/DE 1992), the saucy divorce comedy "Lovers" (AT 1995) and the tragicomedy "Lamorte" (AT 1997) about a reunion of school friends that holds shocking news for one of them. "Lamorte" was honored with the audience award at the Baden-Badener Fernsehfestival.

Schwarzenberger again directed for the big screen in the romantic comedy "Tafelspitz" (AT 1993), the satire "Ein Mann in der Krise" (AT 1995) and the serial killer thriller "Das Siegel" (AT 1998). His made-for-TV film "Krambambuli" (AT/DE 1998) a blend of Heimatfilm, alpine western and a dog story garnered Schwarzenberger the Austrian film and TV award "Romy" as Best Director. He also received the Grimme-Preis together with leads Tobias Moretti, Christine Neubauer and Gabriel Barylli.

In the first decade of the 21st century, Schwarzenberger's work remained limited to both low and high brow TV productions. Dramas like "Annas Heimkehr" (2003) that has catholic maid taking care of a Jewish baby in Nazi Germany alternated with comedies like "Copacabana" (2007) about an eventful wedding anniversary, starring Bruno Ganz and Nicole Heesters. A huge success were the biopics "Andreas Hofer – Die Freiheit des Adlers" (AT/DE 2002), about the Tyrolean freedom fighter and folk hero, "Margarete Steiff" (DE/AT 2005), about the creator of the world famous stuffed toys, "Sisi" (AT/DE 2009), about legendary empress Elizabeth of Austria and "Die Verführerin Adele Spitzeder" (DE/AT 2012), about the actress, singer and financial fraud of the same name.

To this day, Xaver Schwarzenberger's filmography as a director comprises of more than 50 works, as DoP he far surpasses 100. Although it is not uncommon for him to make more than three films a year, the intervals between productions have increased in recent years. The drama "Stille" (DE/AT 2013, TV) tells the story of an egomaniac journalist who suffers a personal crisis and retreats to a lonely cabin in the mountains. The comedy "Zwei Esel auf Sardinien" (2015, TV) based on Jutta Speidel's novel is about a spirited couple whose vacation to Sardinia turns out to become a trip full of adventures.