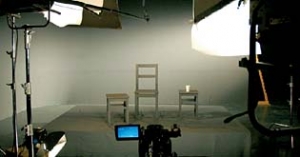 At the end of the 1990s Mohammed Fazazi became Imam of the Al Quds mosque in Hamburg. In January of the year 2000, during the last few days of Ramadan, Fazazi held a number of ‘lessons’ in the mosque’s prayer room, during which those present were able to pose questions on various aspects of life that they would normally have to submit in writing. These sessions were recorded on video tape anonymously and distributed in the mosque’s book shop, but also outside the mosque. After the attacks of 11 September 2001 in New York and Washington, it became known that three of the four suicide pilots, but also others – members of the so-called Hamburg Group – had attended the Al Quds mosque regularly, and were in close contact with Imam Fazazi.

The film "Hamburger Lektionen" is a word for word reconstruction based on these video recordings, of two entire sessions from January 2000. It provides a unique opportunity to become acquainted with the internal logic of an Islamic thinker and preacher. Mohammed Fazazi returned to his native Morocco in October 2001. (Production Notes) Romuald Karmakar’s earlier film, "Das Himmler-Projekt", was about a speech by Heinrich Himmler that lasted three-and-a-half hours (which publisher Joachim C. Fest once described as “one of the most appalling testimonies in the German language”). The current work marks the second of Karmakar’s projects in which he attempts to get closer to a submerged testimonial by filming actor Manfred Zapatka reciting it for the camera.