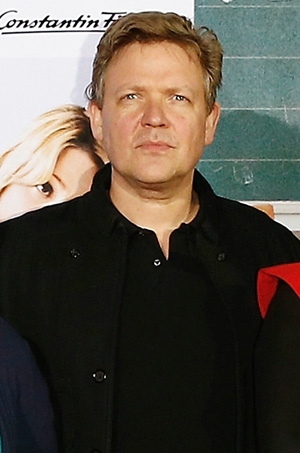 Justus von Dohnányi at the premiere of "Frau Müller muss weg" in Cologne on January 12, 2015

Justus von Dohnányi, born December 2, 1960, as the son of conductor Christoph von Dohnányi, took actor's training at Hochschule für darstellende Künste in Hamburg. From 1985 on, he performed at Frankfurt's Schauspielhaus and became a cast member of Hamburg's Thalia Theater in 1998. From 1993 on, von Dohnányi also appeared in numerous TV productions. He made his movie debut in 1999 in the US remake of "Jakob der Lügner" ("Jakob the Liar").

Since then, he most often appeared in ambivalent parts as a person of authority or as a careerist. Von Dohnányi starred as Captain Nikoli in the James Bond film "The World is Not Enough" (1999), as a brutal prison officer in "Das Experiment" ("The Experiment", 2001), a role that won him the German film award as "Best supporting actor", as a manager in the thriller "Blueprint" (2003), as a Nazi general in "Der Untergang" ("Downfall", 2004), or as a the head of a Nazi district in "Napola" ("Before the Fall", 2004). In 2007, Justus von Dohnányi made his debut as a director with the comedy "Bis zum Ellenbogen". But Dohnányi not only directed and produced the film, but also wrote the screen play and played a key supporting role.

Von Dohnányi returned to acting in the following years, often proving his knack for portraying unsavoury characters, including a turn as an aggressive mobster in "Hardcover" or as a scheming fortune hunter in "Die Buddenbrooks". In television, he appeared as a cook in "Es liegt mir auf der Zunge" and as the first husband of Heike Makatsch's character in "Dr. Hope – Eine Frau gibt nicht auf". His next big screen role was the part of actor Veit Harlan in Oskar Roehler's controversial "Jud Süss – Film ohne Gewissen" ("Jew Suss - Rise and Fall"). In 2010, he won the German Film Award for Best Supporting Actor for his performance as an endearingly delusional singer in the comedy "Männerherzen" ("Men in the City"). The same year, he joined the ensemble of Dani Levy's "Das Leben ist zu lang" ("Life Is Too Long", 2010), and went on to play a conservative businessman in the historical sports drama "Der ganz große Traum" ("Lessons of a Dream", 2011).  In the sequel "Männerherzen... und die ganz ganz große Liebe" ("Men in the City 2"), von Dohnányi reprised his award-winning role.

He then played a mean zoo director hunting for a cuddly snow creature in the childrens' film "Yoko". In "Ruhm" ("Glory: A Tale of Mistaken Identities", 2012), an adaptation of Daniel Kehlmann's eponymous novel, von Dohnányi appears as an engineer who starts receiving phone calls from total strangers on his new cell phone.

He next had parts in the comedy "Frau Müller muss weg" ("Ms. Mueller Must Go") and the British-American production "Woman in Gold". Those two as well as "Desaster" were released in 2015.

He next played a scheming school official in the children's film "Hilfe, ich hab meine Lehrerin geschrumpft" ("Help, I Shrunk My Teacher", 2015) and a ruthless CEO in the drama "Der Bankraub" (2015, TV). In 2015, he also appeared in two entries of the popular "Tatort" series.

In the series "Charité" (2017) he played the pioneering physician Robert Koch, and in the cinema comedy "Safari - Match Me If You Can" (2018) he played a leading role as a married pilot who ends up in bed with a young YouTube influencer. In the next few years, von Dohnányi also regularly alternated between serious and humorous roles. Among others, he was part of the main ensemble of the satire "Der Vorname" ("What's in a Name?"), played a psychopathic in the psychodrama "Im Schatten der Angst" (2019, TV) and Uncle Julius in "Als Hitler das rosa Kaninchen stahl" ("When Hitler Stole Pink Rabbit", 2019), a youth film about the Nazi era and the Holocaust. He was a school principal in "Die Schule der magischen Tiere" ("School of Magical Animals", 2020) and a distinguished butler in "Lassie – Eine abenteuerliche Reise" ("Lassie come Home", 2020).

Alongside Ulrich Matthes, he played a leading role in the melancholy two-person intimate drama "Freunde" (2021, TV), followed by a role as a conservative teacher in the comedy "Eingeschlossene Gesellschaft" ("Locked-In Society", 2022).