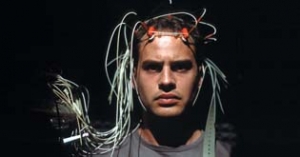 When former journalist Tarek Fahd, who presently drives a cab in the German town of Cologne, stumbles upon a newspaper ad looking for volunteers for a psychological experiment, he convinces his former boss to commission him to report undercover about the experiment, which seems to be partly funded by the army. Just before Tarek enters the experiment and agrees to live in a mock prison for two weeks, waiving his civil rights, his taxi is hit one night by the car of a young and beautiful woman. Dora has just lost her father, and she and Tarek spend a night together.
But the next morning Dora has vanished and Tarek starts his "term" in the "prison" that has been built into the cellar of the university. In the beginning, everyone, "guards" and "prisoners" alike, take it as a game. When Tarek, who records the proceedings with a miniature camera hidden in his glasses, starts to provoke the "guards", the situation begins to get out of hand. But the psychologists, who keep a 24-hour surveillance on the experiment, decide not to intervene. An unimaginable nightmare has begun. And the experiment turns into a matter of life and death...