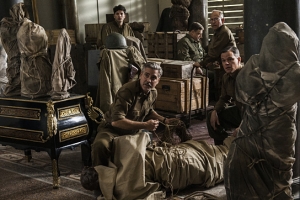 Not long after US American and British troops land in Normandy, Hitler issues the order that no significant works of art shall fall into enemy hands. Any piece German troops are unable to take with them or hide in secret stashes is to be destroyed. The Allies refuse to sit back and watch this barbaric act take place; instead they put together an ingenious and skilful platoon of ‘monuments men’ who are given the task of going behind enemy lines to identify and secure any endangered works of art. And so, led by art expert Frank Stokes, this group of museum directors, curators and art historians set out. They soon find themselves not only up against Nazi officers keen to adorn their private collections with a few art treasures, but also having to contend with both ignorance and arrogance in their own ranks.

Based on Robert M Edsel’s book, the film describes the most dangerous treasure hunt in history. Director George Clooney, who also appears in the leading role, successfully combines moments of comedy, tragedy and pathos in order to sing the praises of the men who managed to save these monumental works of art.