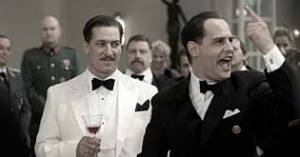 Ferdinand Marian was the actor who in 1940 gave a brilliant performance in the lead in Veit Harlan’s Nazi propaganda film "Jud Süss" – but the role was to break him. The situation already begins to come to a head for Marian during the filming when his wife distances herself from him because she can’t bear to see how her husband has changed.

The national and international success of "Jud Süss" – which delights audiences at its premiere at the Venice international film festival founded by Mussolini – is but a brief, albeit ecstatic, intermezzo. In time the Nazis’ new superstar begins to see through the effect that the film has on society; he also recognises the criminal nature of the regime. Not only are many of his friends forced to emigrate; the Marians also hide Jewish actor Adolf Wilhelm Deutscher in their summerhouse – until a maid denounces Deutscher to her SS lover. In a desperate attempt to distract himself, Marian succumbs to alcoholic binges and affairs but his actions only succeed in earning him the disapproval of, among others, the propaganda minister himself. In a bid to control him, Goebbles has Marian’s wife Anna deported. But this only accelerates the actor’s demise, and even his Czech lover Vlasta can no longer give him the support he needs. He no longer wishes to have anything to do with the most successful film of his career.

After the end of the war Marian observes others who were involved in the film attempting to acquit themselves – particularly its director, Nazi propagandist Veit Harlan. At a garden party in Munich Marian meets concentration camp survivor Deutscher, who in forms him of Anna’s death. Unable to bear Vlasta’s intimate behaviour with an American soldier, he breaks down, gets into his car and drives off, never to return again.