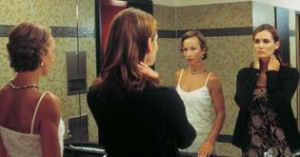 After 11 September 2001: They meet casually, more or less by chance, and return to their everyday lives. The eight figures in September come from different worlds, linked together by one thing: they are all at the mercy of their conflicting emotions, their absolute inner turmoil reflected in, at times, unpredictable behavior.

The film offers a series of snapshots, not a key to a new way of life. It sheds light on a particular slice of time, the immediacy and synchronicity of events and their impact on individuals. A well-rounded, coherent composition emerges, demonstrating the continuum between the public and the private sphere, and how the incomprehensible shock that hit society filters through into individual lives. The ways in which society′s helplessness and the inability to act are manifested in sometimes irrational reactions. The film focuses on a burning topical issue, namely globalization, which has not previously found its way into the cinematic response to the world in this particular form.