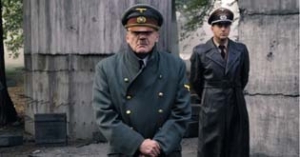 Berlin, April 1945. A nation awaits its downfall. House-to-house fighting rages in the streets of the capital. Hitler and his officers and closest confidantes have barricaded themselves in the Führer's Bunker. Among them is Traudl Junge, Hitler's private secretary, who refuses to desert him.

Outside, the situation escalates. While the Red Army advances and people scramble in desperation as the districts are rocked by explosions, Hitler experiences the downfall of the Third Reich behind the walls of the bunker. Although Berlin can no longer be held, the Führer refuses to leave the city. As Albert Speer, his official architect, puts it, he wants to be "standing on the stage when the curtain drops."

Screenwriter and producer Bernd Eichinger bases his history of the downfall of the Third Reich on Joachim Fest's bestseller of the same title and Traudl Junge's memoirs, focusing on the time between April 20, 1945, Hitler's last birthday, and May 2, 1945, when Hitler and his followers evade the hopeless struggle through suicide. Director Oliver Hirschbiegel brings the historical figures to life with documentary precision. Hitler, played by Bruno Ganz with alarming authenticity, is not portrayed as a demonic madman, but rather as a dictator filled with destructive energy who deliberately stages his own downfall and that of the German people.