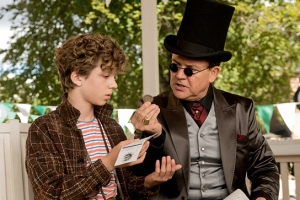 After directing films as diverse as "Halbe Treppe" ("Grill Point") and "Sommer vorm Balkon" ("Summer in Berlin"), Andreas Dresen is now making his first foray into family entertainment with a big screen adaptation of James Krüss's 1962 novel which has been the director's favorite book since his childhood days. 12-year-old Berliner Arved Friese has been cast in the title role as "Timm Thaler" who trades his enchanting laughter to the mysterious Baron Lefuet (played by actor-director Justus von Dohnányi) in exchange for the ability to win any bet he makes. However, Timm soon realizes that a person is not complete without laughter, but Lefuet is not that easy to outwit when he tries to regain this gift of laughter...