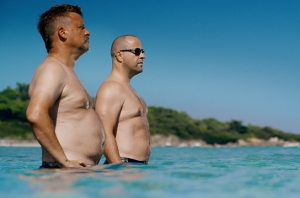 Fugitive arms dealer Mischa has set his wife Lydia on the prosecutor Dr. Würsch. She lures him to her mother-in-law's holiday home so he'll betray the name of his key witness. Würsch is corrupt, Mischa has money, so... But Würsch is playing another game: he has hired crooks Ed and Mace to protect him from Mischa and his hit-man Johann. He also has the hots for Lydia.

Ed and Mace are also up to something. Is Mace even Mace? If not, who is pretending to be him? Not that Lydia is innocent: she's having a fling with Johann and using Würsch to get rid of her husband. She wants the money in the safe so quickly starts a gang war that should finish him.

But when Mischa's mother is killed by Ed there goes the only person who can open the safe! Würsch, fearing Mischa is on his way and will order Johann to kill him, sets a trap and... kills Lydia by mistake! He wants to run, Ed and Mace stick to the plan: they want the money in the safe. Würsch is handcuffed to Mace, Ed gets the key but is then stuck in the chimney trying to get into the sealed building. All seems lost as Johann appears. Fortunately for all concerned, he drowns himself in the pool!

The safe is finally opened. Now they just have to get Ed out of the chimney and unlock the handcuffs. But since Würsch, Mace and Ed are out to get each other anyway, it's not long before... more people are dead! At which point Mischa arrives, sees all the bodies, reaches for a calming drink, thoughtfully poisoned perviously by someone else, and dies!

Ed, who has managed to free himself, grabs the money, steals a car and drives off into the sunset with his former lover Ushi. It's a happy end, right? Or will there be another disaster?