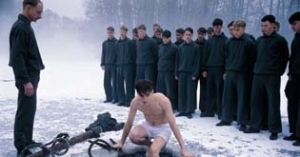 Germany, 1942. The Hitler regime is at the peak of its political and military power. Seventeen-year-old Friedrich Weimer, from the Berlin working-class district of Wedding, is a gifted boxer.

Thanks to his talent, he receives an offer to study at the "Napola", the elitist National-Political School at Allenstein, which trains future leaders of the German Reich. Friedrich sees this as the chance of a lifetime to free himself from the restrictions of his class and enrols in the school, located in an old castle, against the will of his parents. There, in a disconcerting world dominated by harsh Nazi discipline, he experiences both fierce rivalry and unexpected camaraderie – until a barbarous raid against escaped prisoners of war and his growing friendship with Albrecht Stein, the quiet, sensitive son of a high-ranking Nazi official, force him to make an important decision, one that will also mark the end of his youth.


After his prize-winning debut TV movie "The Phantom" and his teenage comedy "Girls on top" (Berlinale 2001), young director Dennis Gansel turns here to the serious topic of confronting Germany’s National-Socialist past and has been rewarded for his efforts: "Napola" received the EuropaCinema Platinum Award 2004 as Best Film in Viareggio and the Audience Award at the Hamptons International Film Festival. This year’s Shooting Star Max Riemelt was named Best Actor at the Karlovy Vary International Film Festival 2004 for his lead performance of Friedrich Weimer.