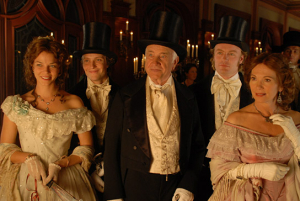 Buddenbrooks – The Decline of a Family

Buddenbrooks – The Decline of a Family is the gripping cinematic adaptation of Thomas Mann′s Nobel Prize-winning novel of 1900, starring Academy Award-nominee Armin Mueller-Stahl in the lead role. In loving, compassionate detail and cinematic scope, Emmy Award-winner Heinrich Breloer portrays the rise and decline of a merchant family in the bourgeois aristocracy in Luebeck in their fight and sacrifice for the economic survival of the family and their pursuit of happiness and impossible love.

While Thomas is willing to fill the void of their father, Consul Jean, and to steer the firm through the times of modernization and rising competition, his brother Christian is trying to break away from any responsibility. We find him in dubious company, marrying a woman from a vaudeville show, rebelling against everything their father stood up for. It is left to their sister, Tony, who sacrifices her true love for the sake of the family’s fortune, to hold the family ties together. But when their competitor Hagenstroem proves to have the better instinct for the changing needs of the market, even her influence seems to vanish...