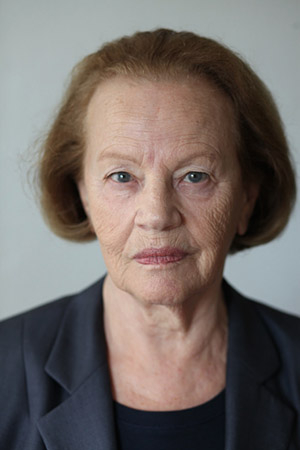 Gudrun Ritter, born on November 16, 1936, in Marienberg in the Ore Mountains in eastern Germany, studied acting at the Theaterhochschule in Leipzig from 1956 to 1959. She was subsequently engaged by the Deutsches Theater Berlin, where she was a member of the permanent ensemble for more than 40 years. She worked with directors such as Frank Castorf, Thomas Ostermeier and Claus Peymann, and her numerous roles included the title roles in "Miss Sara Sampson" and "Elektra" as well as Elisabeth in "Maria Stuart" and Minna Scholz in "Das Friedensfest". Gudrun Ritter continues to appear on stage at both the Berliner Ensemble and the Deutsches Theater.

Gudrun Ritter made her debut as a screen actress in 1962 with a small role in the TV movie "Die neue Losung". Although she remained primarily committed to her theater work, since the mid-1970s she has also appeared regularly in major and minor supporting roles in feature film and TV productions. Among them Rainer Simon's GDR social study "Jadup und Boel" (1980), Simon's biopic "Das Luftschiff" (1983), about the airship designer Franz Xaver Stannebein, and Heiner Carow's international success "Coming Out" (1989), which premiered on the night of the fall of the Berlin Wall and was thus to remain not only the first but also the only GDR film on the subject of homosexuality.

After appearing in front of the camera somewhat less often in the 1990s, Ritter has been seen more frequently again in TV productions since the turn of the millennium: In 2001, under the direction of Andreas Kleinert, she played a bigger supporting role as Omi Birle in "Kelly Bastian - Geschichte einer Hoffnung." The following year, Matti Geschonneck cast her in his family drama "Die Mutter" alongside Martina Gedeck and Harald Krassnitzer. In 2006, Ritter was nominated for the German Television Award for her role in "Bella Block - Das Glück der anderen." Also in 2006, again directed by Andreas Kleinert, she played an important supporting role in the TV social drama "Als der Fremde kam," as the mother of a worker whose wife begins an affair with a union official.

After further TV roles as well as an appearance in Thomas Arslan's ensemble film "Ferien" ("Vacation", 2007), Gudrun Ritter was, after many years, seen again in a leading role in a feature film: In Matti Geschonneck's melancholy neighborhood comedy "Boxhagener Platz," she played a sprightly five-time widow who, together with her grandson, becomes involved in a strange murder case.

In 2011, Ritter was then seen in the U.S. action film "Hanna" as the grandmother of the young title character (Saoirse Ronan), who seeks to avenge her mother's death at the hands of a CIA agent (Cate Blanchett). A year later, the award-winning children's film "Das Haus der Krokodile" (Victor and the Secret of Crocodile Mansion") opened in theaters, in which she appeared with Christoph Maria Herbst as a mother-son duo who want to hinder the investigations of the main character, a young amateur detective, in an old mansion.  After another supporting role in Florian Gottschick's psychodrama "Nachthelle" ("Bright Night"), she was in front of the camera in 2014 for David Wnendt's satirical bestseller adaptation "Er ist wieder da" ("Look who's Back"), in which she portrayed the demented grandmother of the main character's girlfriend, whose family was murdered in a concentration camp. In between, she repeatedly appeared in TV roles, for example in the "Freddy tanzt" from the "Tatort" series, the crime thrillers "Die letzte Instanz" with Jan Josef Liefers and "Zeugin der Toten" with Anna Loos, as well as in series such as "Die Chefin," "SOKO Leipzig" and "Heiter bis tödlich - Hauptstadtrevier."

In Florian Gallenberger's tragicomedy "Grüner wird's nicht, sagte der Gärtner und flog davon" (As Green As It Gets") which was released in 2018, she played the lesbian grandmother of an aristocratic landowning family. In the same year, she also appeared in six episodes of Marco Kreuzpaintner's thriller series "Beat," set in Berlin and produced by Amazon Prime. In 2019, she played a supporting role in the TV movie "Heimatliebe" from the crime series "Polizeiruf 110," in which she has already appeared nine times before since 1972.

In 2020, the comedy series "Das letzte Wort" ("The Last Word") started on Netflix, in which she played the recalcitrant mother of the main character Karla Fazius (Anke Engelke), who, thrown out of the nursing home, moves in with her daughter.

In addition to her work on stage and in front of the camera, Gudrun Ritter has been a voice actor on numerous radio plays since the 1960s.