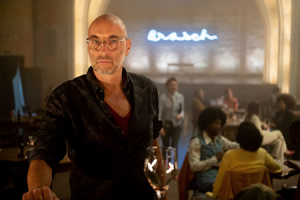 Andreas Kleinert, born in 1962 in East Berlin (then German Democratic Republic), worked as a set assistant at DEFA studios after graduating from high school and began studying directing at the Konrad Wolf Academy of Film and Television in Potsdam-Babelsberg in 1984. He graduated in 1989; his theoretical work dealt with Andrei Tarkovsky's film poetry. His graduation film and feature-length debut, "Leb wohl, Joseph" ("Farewell, Joseph"), was invited into competition at the prestigious Locarno Film Festival in Switzerland in 1990 and received a nomination for the Student Academy Awards presented by the Academy of Motion Picture Arts and Sciences.

After graduating, Kleinert began working as a freelance writer and director. Kleinert was awarded a prestigious Grimme Award for the TV movie "Verlorene Landschaft" ("Lost Landscape", 1992), about a politician who has to come to terms with his past many years after fleeing the GDR. Kleinert attracted a great deal of attention in 1999 with his drama "Wege in die Nacht" ("Paths in the Night"), about an unemployed factory owner who wants to maintain 'law and order' in Berlin on his own. Kleinert also received a Grimme Award (among other prizes) for this film.

In the years that followed, Andreas Kleinert worked primarily for television. Thus, in addition to the highly acclaimed mini-series "Klemperer - Ein Leben in Deutschland" (1999, together with Kai Wessel) and TV dramas such as "Kelly Bastian - Geschichte einer Hoffnung" (2001), he directed two episodes of the crime series "Schimanski" and several feature-length episodes of the "Polizeiruf: 110" series, among them "Kleine Frau" for which he won another Grimme Award in 2006.

His TV drama "Mein Vater" ("Coming Home", 2003) starring Götz George and Ulrike Krumbiegel, about the fate of an Alzheimer's patient, received very good reviews. It won the Grimme Audience Award and was nominated for an Emmy Award in the USA. The tragicomedy "Haus und Kind" (2009), about the relationship turmoil of a history professor and his wife, received the Television Film Award of the German Academy of Performing Arts and the Audience Award at the Filmkunstfest Mecklenburg-Vorpommern.

The ambitious mystery drama "Freischwimmer" ("Head Under Water", 2008) about a teenage outsider who develops a strange friendship with a mysterious teacher, was Kleinert's first feature film since 1999. This was followed in 2010 by the feature film "Barriere" ("Boundaries"),  about nine young actors from Berlin who apply for a summer theater in the province.

In October 2019, Andreas Kleinert began shooting another feature film: the biopic "Lieber Thomas" ("Dear Thomas") illuminated the life of the writer, director and provocateur Thomas Brasch. The film was released in November 2021.