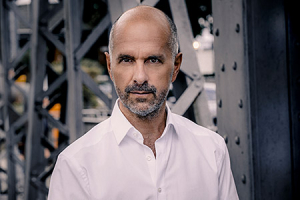 Christoph Maria Herbst, born on February 9, 1966, in Wuppertal, made his first TV appearance as an actor in the comedy series "Sketchup – The Next Generation" in 1997. He then played various roles in TV action series like "Der Clown" or "Alarm für Cobra 11" and in TV movies like "Scharf aufs Leben" and "Solange es Männer gibt" (both 2000). In 2002, Herbst made his break-through performance in the TV comedy series "Ladykracher" alongside Anke Engelke. Since then, Herbst, a very versatile actor, was mainly to be seen in comical roles and starred in sidekick roles in successful productions like "(T)Raumschiff Surprise – Periode 1" and "Der Wixxer" (both 2004). With his performances in Helmut Dietl's "Vom Suchen und Finden der Liebe" and in Doris Dörrie's "Der Fischer und seine Frau" ("The Fisherman and his Wife", both 2005), Herbst proved that he is also able to give a poignant touch to his minor roles in more serious films.

Since 2004, Herbst plays the title role in Pro7's comedy series "Stromberg" which won him Bayerischer Filmpreis in 2005 as well as the Grimme Preis in 2006. This cinema season sees Herbst in further comical roles: He stars in "Hui Buh – Das Schlossgespenst", the film version of the radio play classic, in the hospital satire "Offene Wunden", and in the Edgar Wallace crime movie parody "Neues vom Wixxer".

He then played the antagonist in Detlev Buck's children film "Hände weg von Mississippi" and a man confronted with the conflicted history of his family in the drama "Jakobs Bruder". His television roles include parts in the miniseries "Hilfe! Hochzeit! - Die schlimmste Woche meines Lebens" (2007), the scripted skit show "Tramitz & Friends" (2007), and the feature-length TV comedies "Don Quichote - Gib niemals auf!" (2008) and "Zwei Weihnachtsmänner" (2008). In 2009, he starred in the live-action adaptation of the popular animated TV series "Wickie und die starken Männer " (2009), and also returned for the sequel "Wickie auf großer Fahrt" (2011). He went on to play one of the leads in the teen mystery thriller "Das Haus der Krokodile".

Later that year, the actor starred in the spy film spoof "Die Mamba" as a dogged CIA agent and in the comedy "Männerhort" as a member of a club of frustrated husbands, playing alongside Elyas M'Barek and Detlev Buck. After playing a bit part in "3 Türken & ein Baby" (2015), Herbst was cast as the tormented demigod Loki for the fantasy film "Mara und der Feuerbringer" ("Mara and the Firebringer", 2015).

The TV comedy "Besser als Du" (2015) had Herbst play a double role; a pedantic family man who switches roles with his happy-go-lucky twin brother to make him save his marriage. The film was widely acclaimed by critics who pointed out Herbst's strong performances personifying the opposed characters in particular.

"Die Kleinen und die Bösen" ("The Small And The Wicked", 2015), an offbeat comedy, had Herbst take to his role like a duck to water when he played a frustrated parole officer determined to mess with the life of a petty criminal who has just been released from jail.

The same year, he played a TV executive in the satire "Er ist wieder da" "Look Who's Back", a police detective in "V8 – Die Rache der Nitros" ("V8² - Revenge Of The Nitros") and a German banker in the comedy "Highway To Hellas".

On the big screen, Herbst played the eccentric photographer Ärmel in the adaptation of the children's book "Jim Knopf und Lukas der Lokomotivführer" ("Jim Button and Luke the Engine Driver").

Also in 2018, he played a good-natured animal keeper in the children's film "Liliane Susewind – Ein tierisches Abenteuer" ("Little Miss Dolittle") and was in the cast of Sönke Wortmann's social comedy "Der Vorname" ("How About Adolf?"). On television, he took the leading role alongside Annette Frier in the comedy series "Merz gegen Merz" (2019-2020), about the ludicrous divorce war of a long-standing married couple.

At the end of 2020, two films were released in theaters with Herbst: "Jim Knopf und die Wilde 13" ("Jim Button And the Wild 13") and Sönke Wortmann's comedy "Contra", a remake of the French comedy "Le Brio" ("The brilliant Mademoiselle Neïla", 2018). In it, Herbst plays a sexist and racist university professor who, as a sanction for his failures, is supposed to coach a female student with a migration background for a debating competition.

He also appeared in front of the camera with Christiane Paul for the comedy "Es ist nur eine Phase, Hase" ("It’s just a phase, Honey Bunny"), about a long-standing married couple with children who hits midlife crises. The theatrical release was announced for 2021.