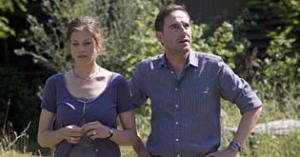 Bernd, a professor for "Modern German History" in Berlin, has pretty much everything one could wish for: a good but not too stressful job and a loving wife who is finally able to move to the capital. Bernd also has a mistress who admires the professor like most of his female students do as well. But there are also a few things that he is missing in his life: He does not own a house and he has no children. But those are exactly the things that he most longs for. He would love to have a child from both women between whom he increasingly alternates while his situation becomes all the more tense. He plays the secrecies game in a virtuoso manner.

Then, he and his wife Lena find a house in the countryside in Brandenburg. The only drawback: An old, unkempt woman is still living in the house. Nevertheless, the two city dwellers settle in and already start to rebuild the house. Although they are strangers to the woman they pretend to be caring "friends" until the old woman is ready to go to a nursing home. During the remodeling of the house, both of them satisfy their most secret dreams. But what has happened to Bernd′s wish to have children?