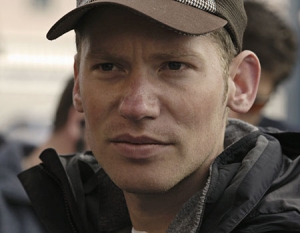 Marco Kreuzpaintner was born on 11th March 1977 in Rosenheim. The son of a secretary and a postman, he first studied art history in Salzburg and took on jobs in film, advertising and music video production. He became assistant to Peter Lilienthal and Edgar Reitz and was also assistant to Reitz for the dubbing of the Stanley Kubrick film "Eyes Wide Shut".

Already Kreuzpaintner's first short film "Entering Reality" with August Diehl and August Zirner received a lot of attention at film festivals in 1998. In 1999, he founded the production company Die Filmmanufaktur together with Oliver Weiss, and in 2000 he made the short film "Der Atemkünstler", which was nominated for the talent award "First Steps Award". In 2002, he made the TV pilot "Rec - Kassettenmädchen/Kassettenjungs".

Kreuzpaintner's first feature film "Ganz und gar" was released in cinemas in 2003 and was nominated for the Max Ophüls Prize. The film depicts the struggle of a young man who loses a leg in an accident and has to come to terms with his new life situation, in the process getting into conflict with his circle of friends and with himself.

"Sommersturm" ("Summer Storm"), Marco Kreuzpaintner's second feature film, was made in 2004 and has autobiographical traits. It tells the story of a young sportsman, played by Robert Stadlober, who falls in love with his best friend (Kostja Ullmann). The film has received awards at numerous festivals, including the New Faces Award for Marco Kreuzpaintner himself. In 2006, he adapted Gudrun Pausewang's youth book "Die Wolke" ("The Cloud") for the big screen, Gregor Schnitzler directed the film about two adolescents in love in the chaos following a nuclear disaster.

The US-American-German co-production "Trade - Willkommen in Amerika" ("Trade") was the second collaboration with producers Jakob Claussen and Thomas Wöbke after "Sommersturm" and was released theatrically in 2007. Filmed in America and starring Kevin Kline, the film tells the story of how children and women are abducted from Mexico to be sold in the USA as sex slaves. The film won Kreutzpaintner the Cinema for Peace Special Award of the Hessian Film Prize and received the Bernhard-Wicki Film Prize at the Munich Film Festival.

On October 9th, 2008, "Krabat" ("Krabat and the Legend of the Satanic Mill"), the film adaptation of Otfried Preußler's youth book of the same name, was released in German cinemas. The story, which is based on a Sorbian folk tale, tells of the boy Krabat, who is taken to the mill of a dark master to learn the art of black magic. Robert Stadlober, Daniel Brühl and David Kross star in the leading roles.

Afterwards, it became quiet around Kreuzpaintner for some years. He occasionally worked as a producer, but it took six years before he started directing again: in autumn 2014 "Coming In" was released in cinemas, a comedy about a gay star hairdresser who starts working incognito in the salon of a neighbourhood hairdresser to expand his customer base.

For television he then shot the much praised "Polizeiruf 110" episode "Und vergib uns unsere Schuld" (2015), with Matthias Brandt as Inspector Hanns von Meuffels. His feature film comedy "Stadtlandliebe" (2016), about a successful city couple who wants to make a fresh start in the countryside, was less successful with critics and audiences. Kreuzpaintner then received very good reviews again for the multi-layered TV thriller "Sanft schläft der Tod" ("Your Children", 2016), about the abduction of two children. For Amazon he directed "Beat" (2018), a seven-part thriller series set in Berlin's club and techno scene. The leading roles are played by Jannis Niewöhner, Karoline Herfurth, Christian Berkel and Alexander Fehling.

With "Der Fall Collini" ("The Collini Case") Kreuzpaintner finally made another feature film: a film adaptation of Ferdinand von Schirach's novel about the mysterious murder of an old, influential industrialist. The film, featuring Elyas M'Barek and Franco Nero, was released in German cinemas in April 2019.