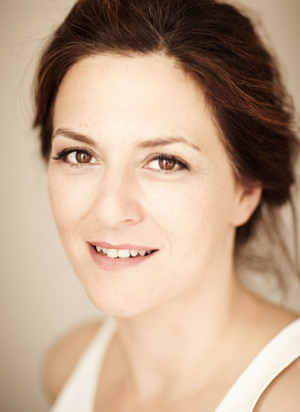 Martina Gedeck was born in Munich on September 14th 1961. In 1971, her family moved to Berlin, where the 11-year-old debuted as an actress in children's TV shows. After finishing school in 1981, she enrolled at the Freie Universität Berlin, majoring in German literature and history.

From 1982 to 1986, she attended the acting class at the Hochschule der Künste. During that time, Gedeck made her stage debut at the Theater im Turm in Frankfurt. She performed on a regular basis at the Deutsche Schauspielhaus in Hamburg, and had engagements at other theatres in Basel, Berlin, Frankfurt and Hamburg.

After getting rave reviews for her award-winning performance in the TV-drama "Hölleisengretl" (1995), Gedeck impressed critics and moviegoers alike with her interpretation of shy waitress Seraphina in Helmut Dietl's "Rossini oder die mörderische Frage, wer mit wem schlief" ("Rossini", 1996) and consequently was awarded the German Film Award for Best Actress In A Supporting Role in 1997.

By then, Gedeck had established herself as one of the most prolific character actresses in Germany. She effortlessly switched ambitious feature films like "Viehjud Levi" ("Jew-Boy Levi", 1999) and highbrow TV-dramas like Dominik Graf's "Deine besten Jahre" (1999), garnering numerous awards and nominations along the way. Her international breakthrough came with "Bella Martha" (2001) by Sandra Nettelbeck: Gedeck plays successful but lonely chef Martha, who suddenly has to come to terms with the orphaned daughter of her dead sister and a new Italian assistant cook. The engaging film played extremely well in Germany and abroad, and Gedeck was awarded the German Film Award as Best Actress.

She continued to win audiences over with convincing turns in TV dramas "Romeo" (2001) and "Die Mutter" (2002), and after several more TV-productions added two prestigious projects for the big screen to her résumé in 2006, the much talked about literary adaptation "Elementarteilchen" ("The Elementary Particles") and the oscar-winning drama "Das Leben der Anderen" ("The Lives of Others"). But also in smaller productions like Stefan Krohmer's "Sommer 04" ("Summer 04", 2006) she continued to give stunning performances. Two other prestigious projects were released in autumn/winter 2008: Bernd Eichinger's adaptation of the book about german terrorism "Baader Meinhof Komplex" ("The Baader Meinhof Complex"), in which Martina Gedeck plays Ulrike Meinhof, and Helma Sanders-Brahm's portrait of pianist Clara Schumann, who is torn between her love for her husband Robert and young Johannes Brahms, "Geliebte Clara" ("Clara").

In 2010 she worked again with director Oskar Roehler and played the wife of actor Ferdinand Marian (Tobias Moretti) in his controversial film "Jud Süß - Film ohne Gewissen" ("Jew Suss - Rise and Fall"). She then had a supporting role in the Spanish thriller "Agnosia", which was not released in German cinemas. In 2011, she played a police psychologist trying to solve the case of a missing child in "Bastard" and a woman who suddenly finds herself isolated in the mountain wilderness by an invisible wall in "Die Wand" ("The Wall"), released in 2012. This performance garnered Gedeck a nomination for the German Film Award. Spring 2012 also saw the release of István Szabó's "Hinter der Tür" ("The Door") in Germany. In the film, Gedeck plays a writer who develops a unique relationship to her elder and slightly peculiar maid.

Following roles in "Halbe Hundert" (TV, 2012) and "Die Nonne" ("The Nun", F/D/B 2013), she was one of the leads in Bille August's "Nachtzug nach Lissabon" ("Night Train to Lisbon", D/CH/PT), which premiered at the 2013 Berlin IFF. Shortly afterwards, she starred opposite Klaus Maria Brandauer in the made-for-TV drama "Die Auslöschung" ("Blank"), and played a woman whose ex-husband is confronted with her ex-lover in Markus Imboden's acclaimed "Am Hang" (CH/D 2013). After getting much attention for her portrayal of a tough juvenile court judge in the TV production "Das Ende der Geduld" (2014), Gedeck was one of the leads in the TV miniseries "Tannbach – Schicksal eines Dorfes", which is set in the last days of WWII. In 2015, Martina Gedeck starred alongside Devid Striesow in the screen adaptation of the bestselling novel "Ich bin dann mal weg" ("I'm Off Then: Losing and Finding Myself on the Camino de Santiago") and played the mother of Anne Frank in "Das Tagebuch der Anne Frank" ("The Diary of Anne Frank").

She played a violin instructor in "Seit Du da bist" (DE/AT 2016) and starred opposite Ulrich Tukur in "Gleißendes Glück" ("Original Bliss"), winning the "Preis für Schauspielkunst" at the Festival des deutschen Films in Ludwigshafen for the latter performance.

Lars Kraume cast Gedeck for the role of a state attorney in his interactive TV drama "Terror – ihr Urteil" ("The Verdict", 2016). She next reteamed with Julian Roman Pölsler, who directed her in "Die Wand", for "Wir töten Stella" ("Killing Stella", AT 2017).

In 2018, Gedeck revisited the role of worker Hilde Vöckler for the second season of the epic village saga "Tannbach". Josef Bierbichler's feature film "Zwei Herren im Anzug" ("Two Men in Suits", 2018), in which she played the wife of the main character, the innkeeper Pankraz (Bierbichler), also dealt with 20th-century German history. In the bitterly evil black-humor streaming series "Arthurs Gesetz" (2018, director: Christian Zübert) she had a double role as the dominant wife of a long-term unemployed person (Jan Josef Liefers) and as her twin sister.

In "Herzjagen" (AT 2019), Gedeck starred as a woman with a heart condition who can't cope with her sudden recovery, and she played another leading role in the divorce comedy "Und wer nimmt den Hund?" ("Lost in Separation", 2019), in which she stood in front of the camera with Ulrich Tukur for the fifth time.

At the Bavarian Film Awards 2020, Gedeck was awarded the honorary prize of the Minister President. In the same year, she was part of the main ensemble of the TV miniseries "Oktoberfest 1900," about power and intrigue games in Munich's brewing industry at the turn of the century. The start of the big screen comedy "Wunderschön", originally announced for 2020, had to be postponed due to the Corona pandemic.