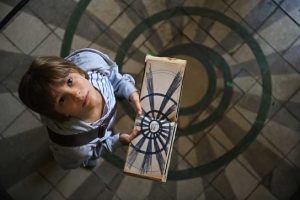 Victor and the Secret of Crocodile Mansion

The Laroche family has just moved into an old estate. When his parents go an a business trip, 11-year-old Victor stays at home with his older sisters Cora and Louise. While exploring the vast mansion, Viktor discovers a small stuffed crocodile. Suddenly, a dark and mysterious figure passes behind him. Viktor starts searching for the unknown intruder, and enters the "forbidden room", where he finds the diary of his deceased grand cousin Cäcilie. Cäcilie's body was found in the house years ago, and the circumstances of her death were never explained. The diary includes hints that might explain her fate, but Mrs Debisch and her son Friedrich, who reside on the first floor, continue to hinder the investigations. And Strichninsky, the oddball neighbour, starts behaving even stranger than usual. What do they know about Cäcilie's death? And, even more importantly, did they play a role in it?