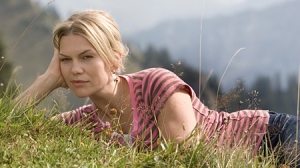 Anna Loos was born in Brandenburg an der Havel on November 18 1970. At the age of six, she started to train as a ballet dancer; when she was twelve years old, she used her pocket money to pay for singing lessons. In 1988, she fled from East Germany via Czechoslovakia, Hungary and Austria. Once she arrived in West Germany, she lived with her aunt in the Hamburg district of Wedel, where she also attended school until the twelfth grade. Meanwhile, she continued her singing lessons and performed in several bands.

Music eventually led her to acting, when Loos enrolled at the Stage School of Music, Dance and Drama in Hamburg in 1992. She began performing in comedy productions at the Hamburg Schmidt Theater, and in 1994, she appeared in the musical "Grease" at the Imperial Theater. Loos also performed in several shows at the Theater Bremen.

In 1996, she made her TV debut in the comedy show "T.V. Kaiser", and one year later, she was cast in the role of secretary Lissy in the popular Cologne edition of the "Tatort" series. Loos played the character until 2000, and she later reprised it for several guest-star appearances.

She had her first role in a theatrical release in Michael Gwisdek's "Das Mambospiel" ("The Big Mambo", 1998). The following year, she played a med student opposite Franka Potente in the horror movie "Anatomie" ("Anatomy"), for which she also provided the title song. Loos's vocal talent was also used in the TV movie "Halt mich fest!" (1999): Starring opposite her future husband Jan Josef Liefers, she played a rock singer and delivered an award-winning performance.

Loos went on to star in highly diverse features, including "Der Mistkerl" ("The Bloody Nuisance", 2001), "NeufundLand" ("NewFoundLand", 2003), "Gisela" (2005) and "Das Geheimnis im Moor" (2006, TV). In 2006, she got rave reviews for her performance as the female lead in the Berlin stage production of the musical "Cabaret". The same year, she replaced the late Tamara Danz as lead singer of renowned German rock band "Silly", with which she went on a successful national tour.

Loos continued her prolific acting career with parts in "Das Wunder von Berlin" ("The Miracle of Berlin", 2008, TV) "Lilys Geheimnis" (2008, TV) and "Es liegt mir auf der Zunge" (2009,TV), the latter two also starring her husband Jan Josef Liefers. In 2011, she won the Goldene Kamera for Best Actress for her performance in the TV production "Wohin mit Vater?" (2009), followed by another award-winning turn in the made-for-TV drama "Die Lehrerin" (2011). In addition to this, she enjoyed ongoing success as a singer.

While also being a cast regular of the acclaimed TV series "Weissensee", Loos starred opposite Devid Striesow in the theatrical release "Die Frau von früher" (2012), which garnered her a nomination for a Grimme Award. After participating in the documentary "Silly" (2014), which chronicles the history of the band, Loos became the titular hero of the TV series "Helen Dorn". In 2014, she and Jan Josef Liefers received lifetime achievement awards of the Festival des deutschen Films. Both again starred together in the 2015 release "Desaster" ("Disaster").

Anna Loos and Jan Josef Liefers have two daughters together, and their eldest child Lilly Liefers (born 2002) has followed in their footsteps as an actor.