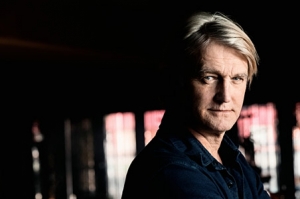 Detlev Buck, born on 1 December 1962 in Bad Segeberg (Schleswig-Holstein), grew up on his parents' farm in Nienwohld near Hamburg. After graduating from high school and community service, he completed an apprenticeship as a farmer. Parallel to this, he applied to an acting school in Hamburg, but was rejected.

Through cameraman and director Wolfgang Fischer, in whose never publicly shown feature film "Was sein, muß sein" Buck participated in 1982, he came into contact with the film scene. In 1984 he shot his first five-minute film "Der Fänger im Roggen" and in the same year realised the 45-minutes long feature film "Erst die Arbeit und dann?", which is very obviously partly autobiographical: Buck took over the role of the young farmer Gerhard Ramm and contrasted the Holstein country life with the Hamburg nightlife with a lot of wit, but without ever exposing his main character.

From 1985 to 1989, Detlev Buck studied at the German Film and Television Academy in Berlin. During this time he made several short films, for example "Eine Rolle Duschen" and "Schwarzbunt Märchen". His graduation film "Hopnick" gave insight into the everyday life of a bizarre East German customs officer, again played by Buck himself.

In 1991 he co-founded the "Boje Buck Filmproduktion" together with Claus Boje, shareholder of the Delphi cinema and managing director of the Delphi film distribution. In the same year, the company produced Buck's first feature-length film "Karniggels" about a young policeman (Bernd Michael Lade), who does not start his service, as he had hoped, in the big city, but in the countryside, where he is to investigate a cow murder. Buck also remained true to the rural setting in "Wir können auch anders" ("No More Mr. Nice Guy", 1993), in which he sent a pair of brothers and a deserted Red Army soldier on an odyssey through East Germany. Once more, he mixed grotesque and character studies in his very own way.

In 1995, "Männerpension" ("Jailbirds") finally brought Buck a huge box-office success: alongside Til Schweiger, Buck starred as one of the two prison inmates who seized their chance to participate in an unusual rehabilitation program with Heike Makatsch and Marie Bäumer playing their female counterparts.

His next two feature films "Liebe deine Nächste" ("Love Your Neighbour!",1998), a film about eager Salvation Army employees and a ruthless management consultant, and the crime comedy "Liebesluder" ("Bundle of Joy", 1999) about seduction, blackmail and murder in a small town in the Sauerland region, proved less successful at the box office than the funny-laconic fairy tale "Männerpension".

After a longer break from directing, during which he acted and produced, Buck adapted the youth novel "Knallhart" ("Tough Enough") by Gregor Tessnow for the big screen in 2005/2006. The subdued big city drama about the daily struggle for survival of a 15-year-old (David Kross) in the criminal milieu of the youth gangs of Berlin-Neukölln received numerous awards, including the Silver Lola at the German Film Prize 2006.

With his next film, Buck changed the genre again: "Hände weg von Mississippi" ("Hands off Mississippi", 2007), based on a book by German author Cornelia Funke, is a light, humorous children's film about the rescue of a horse and was awarded both the Bavarian and the German Film Awards for the best children's and youth film.

For "Same Same But Different", based on the autobiographical book "Wohin Du auch gehst" by Benjamin Prüfer, Buck collaborated again with David Kross in 2008/2009. This time he impersonated a German tourist who falls in love with a young Cambodian woman on a trip to Asia. The initial ease fades when Sreykeo confesses that she is HIV positive. In the course of the relationship, the differences of their lifestyles and views becomes more and more apparent.

For the 2008 European Football Championship, Buck worked on an Internet project: from contributions that football fans from all over Europe uploaded to YouTube, Buck created an approximately 50-minute long film ("23 Tage – Das YouTube-Fan-Tagebuch", "23 Days - The YouTube Fan-Diary") that offers insights into fan perspectives.

In addition to his own films, Detlev Buck has often appeared as an actor in cinema and television productions under the direction of others, including Leander Haußmann's "Sonnenallee" ("Sun Alley", 1999), "Herr Lehmann" ("Berlin Blues", 2003) and "NVA" (2005) and Glawogger's "Contact High" (2007). He also starred in Michael Haneke's critics' and audience success "Das weiße Band" ("The White Ribbon") from 2009.

In 2011, Buck achieved a great audience success with "Rubbeldiekatz" ("Woman in Love"). The travesty comedy about an actor who disguises himself as a woman in order to get the leading female role in a Hollywood comedy attracted more than a million viewers despite mixed reviews. He then took on the film adaptation of Daniel Kehlmann's bestseller "Die Vermessung der Welt" ("Measuring the World", D/AT, 2012): The story, which plays at the beginning of the 19th century, tells of the very contradictory attempts of the scientists Alexander von Humboldt and Carl Friedrich Gauss to measure the earth - Humboldt through tireless travelling, Gauss through mathematical calculations alone.

Buck was then seen as an actor in several films by other directors again: for example as a small town policeman in Leander Haussmann's and Sven Regener's "Hai-Alarm am Müggelsee" ("Shark Alarm at Müggel Lake", 2013), as a vet in Katja von Garnier's bestseller adaptation "Ostwind" ("Windstorm", 2013) and as a physician in a sperm bank in Matthias Schweighöfer's "Vaterfreuden" ("Joy of Fatherhood", 2014).

In his next directorial work, Buck took on a children's radio play adaptation: "Bibi & Tina" (2014) tells of the holiday adventures of the young witch Bibi Blocksberg and her best friend Tina. Also the sequel to this successful film, "Bibi & Tina: Voll verhext!" (2014), was directed by Buck. In both parts he also played the role of the likable vet Dr. Eichhorn. He also appeared in a leading role as a stressed-out husband in the comedy "Männerhort" ("The Man Cave", 2014) and played a minor role as a weird uncle in the road movie comedy "Halbe Brüder" ("Half Brothers", 2015).

At the Saarbrücken film festival Max Ophüls Preis "Ferien" premiered in January 2016. Buck played a central role as a young father who accompanies his adult daughter, who is exhausted by the stress of her exams, on a vacation. In the same month his next directorial work was released in cinemas: "Bibi und Tina 3 - Mädchen gegen Jungs" (2016), in which Buck again played the role of Dr. Eichhorn. In 2017 followed "Bibi & Tina: Tohuwabohu total".

In 2017 Buck made another film as director: "Asphaltgorillas" (released in August 2018), set in the Berlin gangster milieu and based on a short story by Ferdinand von Schirach. After that, Buck was seen as an actor in three films: In "Ostwind - Aris Ankunft" ("Windstorm: Ari's Arrival", 2019) he once again played the sympathetic veterinarian Dr. Anders, in "Rocca verändert die Welt" ("Rocca Changes the World", 2019) he was a helpful cab driver and in the bio pic "Lindenberg! Mach dein Ding" (2019) he had a key role as Teldec record mogul Mattheisen.

As a director, he made the gangster comedy "Wir können nicht anders" ("Christmas Crossfire"), about two lovers who get in the way of a provincial gangster in Brandenburg. Originally produced for theatrical release, the film launched on Netflix in December 2020 due to the COVID-19 pandemic.

Detlev Buck has three daughters and lives alternately in Berlin and Nienwohld.