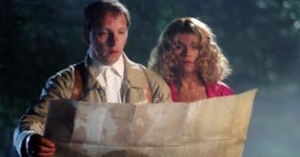 Deep in the woods around London lies the mysterious Black White Castle, one of the oldest castles in Great Britain and the very last building in black & white. Forgotten about by the colorful world, the powerful ruler and crook Earl of Cockwood continues to go about his evil doings almost unnoticed in this scary area - if it weren′t for Doris and Dieter Dubinsky from Bitterfeld. The married couple from Saxony got lost in the woods and become the subject of lots of horrible things: not only are they chased by a mean dog, but they are also witnesses to a cold-blooded murder. An ominous delivery truck runs over the monk with the whip. The viewers suspect it even before Scotland Yard appears on the scene: Der Wixxer is at it again!

This all sounds totally scary and unbelievably complicated – and it is. But still it can all be quickly explained: Chief Inspector Even Longer and his new colleague Long are looking for the legendary Wixxer, who not only has Long′s colleague Rather Short, but also a whole pack of underworld gangsters on his conscience. They′ve got their eye on the Earl of Cockwood, who not only breeds pugs at his castle, but also has a profitable business going on with Girl Groups.