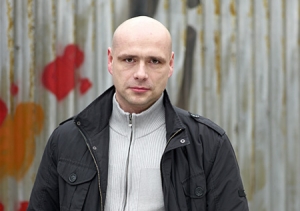 Jochen Alexander Freydank was born in East Berlin on September 15th 1967. Raised in the former German Democratic Republic, he later applied at several film schools. After being rejected, he started out as an editor and assistant director instead. He wrote scripts for several TV formats and made his first experiences as a director, shooting short films and commercials as well as helming theatre productions.

Over the years, he successfully established himself in the television industry, including his work as producer for the popular TV series "In aller Freundschaft". In 1999, he founded the production company Mephisto Film, under which banner he also made his owen films, among them the shorts "Notfall" (2001) and "Dienst" (2003).

Over the course of four years, Jochen Freydank worked on the short film "Spielzeugland" ("Toyland"), which he wrote, directed and produced. Focussing on a tragic episode, the film poignantly and precisely depicts how the majority of Germans, by their conscious suppression and denial of the inhumane and eliminatory state policy, not only tolerated, but in fact made possible the persecution and murder of their Jewish fellow citizens.

"Spielzeugland" went on to win numerous awards at national and international festivals, and was nominated as Best Short Film (Live Action) at the 2009 Academy Awards. It eventually won the Oscar, which Jochen Freydank personally accepted at the ceremony in Los Angeles on February 22nd 2009.

In 2011, he helmed his first feature-length production: "Heimatfront" is an episode of the popular TV series "Tatort" which garnered very positive reviews. Freydank next directed the made-for-TV tragicomedy "Und weg bist Du" in which a terminally ill girl eventually falls in love with the grim reaper.

In early 2013, he began production on the theatrical release "Kafkas Der Bau" starring Axel Prahl. During that time, Freydank also directed another "Tatort" entry titled "Allmächtig" (TV, 2013). "Kafkas Der Bau" premiered in October 2014 at the Busan Film Festival and was released theatrically in the summer of 2015.