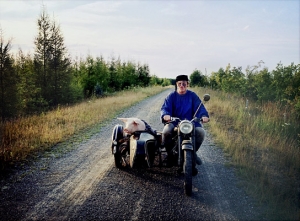 Sourc and © a little film production

Swabian hog farmer Huber is down on his luck: His beloved Birgit has decided to leave for East Germany because her father wants her to take over a large-scale hog plant he recently acquired there. To make things worse, Huber's own farm is finished. His small farming business can no longer compete with the big agricultural players and he is hopelessly in debt. That is why Huber decides to just leave everything behind and to hit the road, taking only the last remaining sow and a shotgun. On the road he meets people who suffered fates similar to his and whose livelihoods have been crushed by harsh economic conditions. Unexpectedly, Huber becomes the leader of a revolutionary movement.