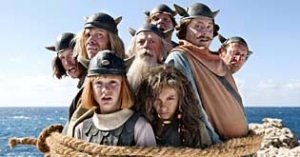 Sequel to the box office hit "Wickie und die starken Männer" (2009). Viking chief Halvar worries when his little son Wickie will finally become a "real man" and a worthy leader. The answer follows quickly, when Halvar is kidanpped by his archenemy, the Terrible Sven – forcing Wickie to take over the command. With the help of his clan and the fearless Svenja he sets out to free his father. This marks the beginning of a great adventure, since the Vikings also look for a legendary treasure.