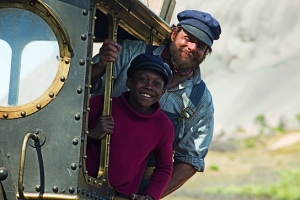 Based on Michael Ende’s best-selling novel, this epic fantasy adventure follows a young orphan boy Jim Button, his best friend Luke and a magical steam engine called Emma as they travel from their home on the tiny island of Morrowland throughout the world in search of the truth about Jim’s origins. Luke and Jim begin the greatest adventure of their lives, promising the Emperor of Mandala that they will rescue his daughter, Princess Li Si, who was kidnapped by pirates and dragged across the terrifying Valley of Shadows to the deadly Dragon City. The further they get, the more their suspicion grows that there is a connection between Jim’s unknown origins and Li Si’s disappearance...