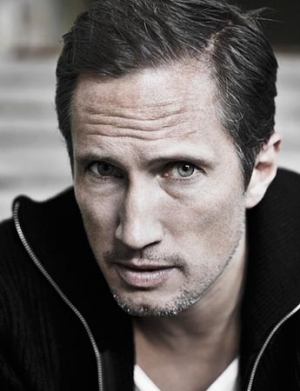 Benno Fürmann, born January 1972, in Berlin, lost both his parents at the age of 15 and grew up with foster parents. During his youth, Fürmann was a rebellious thrill seeker and even did some illegal train surfing until he suffered a severe accident at the age of 17. Fürmann left school after finishing the secondary school degree in 1988. He then worked in several jobs as a waiter, scene shifter, and bouncer and started his acting career with minor parts in "Die zweite Heimat" ("Heimat II") by Edgar Reitz and in the TV movie "Schuld war nur der Bossa Nova".

In 1992, Fürmann went to New York to attend actor’s training at the famous Lee Strasberg Theatre Institute for one year. After his return to Germay, Fürmann at first mainly appeared in minor parts in several TV movies. He made his breakthrough in 1994/95 in a leading role in Peter Timm's drama "Einfach nur Liebe" ("Simply Love") and as a filling station attendant in the Ruhr area in the RTL sitcom "Und tschüss". Fürmann then appeared in several TV movies, for instance in "Das erste Mal" ("The First Time") oder "Landgang für Ringo" (both 1996).

From 1996 to 1999, Fürmann portrayed an equally sensitive and impulsive investigator alongside Dieter Pfaff in the highly praised crime series "Sperling", developed by Dominik Graf. He then caused a stir with the impressive portrayal of the boxer Bubi Scholz in Roland Suso Richter's TV movie "Die Bubi Scholz Story" ("The Bubi Scholz Story", 1998), a part that won Fürman the German TV award as "Best actor".

During the following years, Fürmann mainly focused on his movie career. Some of Germany's most promising directors made use of his acting talent to appear vulnerable and introvert and at the same time smug and rebelliously determined on screen. Thus, Fürmann starred in Lars Becker's "Kanak Attack" (2000), Tom Tykwer's "Der Krieger und die Kaiserin" ("The Princess and The Warrior", 2000), and Doris Dörrie's "Nackt" ("Naked", 2002). Nevertheless, Fürmann probably made his most praised performance in Christian Petzold’s psychological drama "Wolfsburg" (2003). His nuanced portrayal of a man who feels unbearably guilty after causing a lethal hit-and-run accident won Fürmann the Grimme award.

He played an unemployed ad man assigned by the secret service to infiltrate a right-wing terror group in Roland Suso Richter's TV thriller "Die Grenze" ("The Frontier", 2010). The same year, he portrayed an East-German boarder patrolman in the drama "Der Mauerschütze". Fürmann then impressed with a memorable performance in the international co-production "In Darkness" (2011), which is based on true events: Fürmann plays a Polish Jew who hides from the Nazis in the sewers of Lvov. Next displaying a knack for sinister characters, he portrayed the murderous "Indianer Joe" in Hermine Huntgeburth's adaptation of Mark Twain's "Tom Sawyer" (2011). This was followed by a string of comedy roles: He played a penniless aristocrat in "Alles Schwindel" (2013), a pretentious snob in "Hai-Alarm am Müggelsee" (2013) and a careless playboy who suddenly has to act responsible in Vanessa Jopp's "Der fast perfekte Mann" (2013).

In "Der blinde Fleck" ("The Blind Spot"), released in early 2014, Fürmann plays a TV journalist who investigates the 1980 terror strike on the Oktoberfest in Munich. Also in 2014, he played an animal wrangler in the children's film "Quatsch und die Nasenbärbande" ("Fiddlesticks") and a contract killer in the comedy "Die Einsamkeit des Killers vor dem Schuss" ("A Hitman's Solitude Before the Shot").

Following his turn as a pimp in "Von glücklichen Schafen" ("Happy Lambs", 2015), Fürmann played one of the leads in the drama "Nachthelle"("Bright Night") and portrayed a scheming Neo-Nazi in Dietrich Brüggemann's scathing satire "Heil". He also played a supporting role in the American-British thriller "Survivor", starring Pierce Brosnan.

In 2016, Fürmann starred in a string of high-profile TV productions: He played the husband of a comatose woman in the tragicomedy "Zweimal zweites Leben", an ambitious journalist on the trail of a corrupt politician in "Die vierte Gewalt", and a family man whose attempts at open marriage lead to chaos in the comedy "Neu in unserer Familie".

The 2016 science fiction movie "Volt" saw Fürmann playing a member of a brutal police force in charge of controlling refugee camps in Europe.

In 2017/18, Fürmann played a supporting role in the successful television series "Babylon Berlin". On the big screen he starred in the Håkan Nesser adaptation "Intrigo: Tod eines Autors" ("Intrigo: Death of an Author", 2018) as a literary translator who gets caught in a murderous conspiracy.