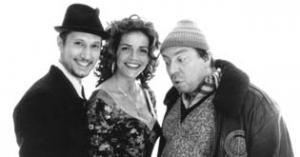 Everything is going badly for the underdog Gosbert Klee. In the middle of winter, the caravan where he has been living - on a dilapidated camp site belonging to his mate Abo - explodes because of a faulty gas pipe. Gosbert loses everything - not that it belonged to him, anyway.

Then the prostitute Carlotta Valdez asks for his help. One of her customers has died of a stroke "on the job". She wants Gosbert to help her get rid of the body. In the dead Bandrik′s wallet, Gosbert finds the key card to a hotel room, in the hotel′s underground garage he finds a BMW, and in the car′s trunk they find the kidnapped multimillionaire Lorenz Kellermann. A favourable opportunity! With the ransom in his pocket Gosbert would never have to freeze again - he could at last realise his dream of emigrating to Africa. Together with Abo and Carlotta, he decides to take over the kidnapping ...