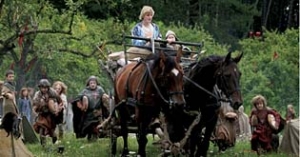 Based on a multi-award-winning novel by Thea Beckman which received
the Youth Literature Award among other accolades, this film tells the story
of 15-year-old Dolf who finds himself accidentally catapulted from the present
day back into the 13th century, where he has to try to hold his ground
amidst the turmoil of the Children′s Crusade which, according to historians,
took place in 1212.
Dolf′s mother is a researcher. After they have a row one day, her son misuses
her latest invention of a time machine to try to get to a football final on
time, but finds himself transported instead to the past. All at once, 8,000
children are on the old Roman road on their way to Jerusalem in order to
′liberate′ the city from Muslims. And Dolf is one of them! If he hadn′t run into
a girl of his own age named Jenne he would have been completely at a
loss. But with Jenne′s help, he learns to cope with life in the Middle Ages.
Against his better judgement Dolf even finds himself among the leaders of
the campaign. The priest, Anselmus, is convinced that the boy has been
sent by God. But should Dolf put his faith in this religious zeal?

Ben Sombogaart: "Set in the mythical era of the Middle Ages, this is a story about an impossible journey that needs to be surmounted; it is a story in which the Gods are never far away. Dolf is a tragic and vulnerable hero obliged to survive his own personal odyssey. This is a multifaceted film, and I believe that Dolf′s story should appeal to everyone. What could be better than to go to the cinema and immerse yourself in a world that otherwise only exists in our dreams and our subconscious?"