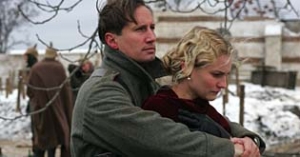 The beginning of the First World War brings together the lives of three people in a highly dramatic way. In 1914, the German Star-Tenor of the Berlin Opera, Nikolaus Sprink, goes to the western front, leaving his big love and singing partner Anna Sörensen behind. At the same time, the Scottish vicar Palmer and the French lieutenant Audebert enter the war. All three are to witness and take part in an unique encounter with enemy troops during Christmas Eve. One which counterpoises the complete senselessness of the war. The film is based on a true event.