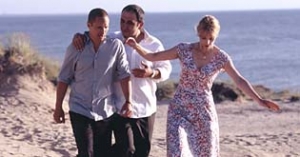 Jerichow, a village in northeastern Germany – the area is poor and there is little work to be found. Here three people, off the beaten path of life, stumble into a fateful encounter: Thomas, young, strong, taciturn, a former soldier, dishonourably discharged; Ali, a bit the worse for wear, but still affable, a Turkish businessman in Germany who is mainly concerned that the employees at his snack bars don′t cheat him; Laura, a woman with a past, attractive, but somewhat withdrawn into the shadows in her marriage with Ali.

Thomas, Ali and Laura withhold themselves and their secrets from one another. They want love, but are also very concerned with security. They are dependent on each other, but what they want can only be reached at the cost of betrayal.

Christian Petzold′s "Jerichow" is a love triangle in which the longings of the three characters only graze the surface of even greater dreams. On the byways of Germany′s Northeast, in the forests of the expansive countryside and along the cliffs above the sea a drama unfolds in which a classical cinematic constellation undergoes a daring reinterpretation. Caught between guilt and freedom, passion and intrigue are desires, the fulfilment of which comes to resemble a curse.