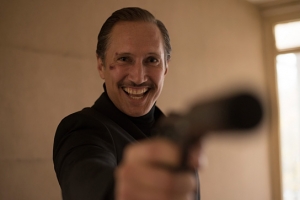 A Hitman's Solitude Before the Shot

The over-ambitious Koralnik has a dream job: he is a contract killer for a secret EU program. But even eight years after his training he still hasn't had a single hit. Bored and frustrated, he lives according to the program's strict rules – withdrawn, no social contact and constantly undercover. One day, the shy Rosa crashes into his car and life. Before he knows it, Koralnik is having dinner with her. For the first time, he can flee his everyday misery for an evening of company. But then the telephone rings. It's Koralnik's first job. With Rosa alongside, Koralnik sets off on a chaotic odyssey through a night in which nothing goes according to plan. It is only when Koralnik's target is revealed to be none other than one of his colleagues that the rigid concept by which he lives finally comes into question. He is confronted with the dilemma of either protecting his secret program or drawing a line under his unfulfilled existence as a killer. It is the biggest liar of them all, Rosa, who forces him to confront his own life's lie.

"A Hitman's Solitude Before the Shot" tells the story of two lovable, tragic and comic antiheroes on an absurd and doomed journey. The film explores the impossibility of being happy when the life one leads is a scam – and of the freedom that comes when one has the courage to admit the lie.