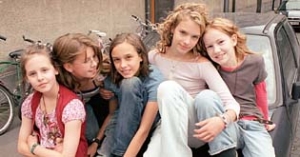 Every girl needs a best girlfriend. And Sprotte has no less than three! Together, they′re the "Wild Chicks," the coolest girl gang of the pre-teen set. Though they′re as different as can be, they′re inseparable when the going gets tough. Melanie raves about Robbie Williams, Trude loves Italian food, Frieda is socially mega-committed and Sprotte herself secretly finds her teacher Frau Rose really cool. And then there′s Wilma, who still has to prove herself before being inducted into the gang.

The biggest problem facing the girls is the rival boy gang, the "Pygmies." Next to its leader Fred, there′s the insatiable Torte, fortune-teller Steve and the aggressive Willi. Then something incredible happens: Sprotte sounds the fox alarm! Grandma Slaettberg wants to slaughter her hens – even though Daphne, Kokoschka and the other feathered damsels are the gang′s mascots. Only the Pygmies can help now...