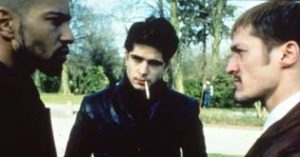 Ertan Ongun is a 25-year-old Turk living in Kiel, in Germany. His parents own a snack stand, but his real family has been the local Turkish gangs. His life - like those of his friends - is characterized by the daily fight for respect and acceptance, growing up in a country he can never call home.Since the age of 15, he has led the life of a petty crook: theft, fights, drugs, police, in short, the hard-edged world of the red light district. In spite of it all, he maintains a sense of humour as he tries to make the best of things - a "tough guy", with his own brand of charm. It is the red light district where Ertan is reunited with Yonca, who now works as a prostitute. Her "protector", Farouk, is dead and now, when Attila, a rival pimp, tries to get his claws into her, she turns to her old friend for help. For Ertan and his pals, Kemal and Mehdi, this is where things start to really heat up...

The brilliant music, inventive editing and the underlying poetry make all the difference for Lars Becker′s episodic tale about friendship, love and loyalty