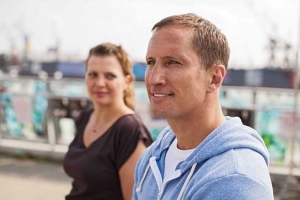 Responsibility doesn't come easily, indeed, it doesn't come at all to the only moderately successful TV presenter Ulf. As for children, he wants nothing to do with them! Charmingly immature, he has no problem winning female hearts and minds, but he now has a problem: His girlfriend Anni has had enough of his non-commitments and is off to pastures new. If that wasn't bad enough, Ulf is having his midlife macho crisis. His wallowing in self-pity, however, is interrupted by the arrival of his young nephew Aaron, quite literally turning up on the doorstep after his mother has had an accident and the boy has decided the best place to stay is "at Uncle Ulf 's." From now on every day is Disaster Day for Ulf. All it would take to complete the mess is, say, if Anni were to turn up again and were pregnant as well. Guess what? Now the chaos that is Ulf 's life is perfect. Could there be any better time for him to finally grow up?