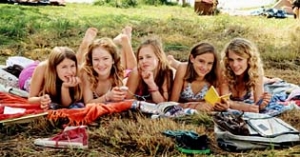 It was a case of ′never change a winning team′ when producer Uschi Reich decided to follow up the success of her first feature film based on Cornelia Funke′s bestselling Wild Chicks series with another adaptation, Die wilden Huehner und die Liebe (translation: "Wild Chicks In Love").

In the new film, Sprotte, Melanie, Frieda, Wilma and Trude each have their own ways of experiencing these new feelings and then suffering from the pangs of first love. Moreover, there is a love triangle between Sprotte′s mother (played by Veronica Ferres), father and a new suitor. But the Wild Chicks come through together in spite of all their emotional turmoil...