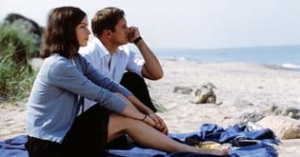 Car salesman Philip Wagner is driving along an asphalted dirt road used by the locals as a short cut to Wolfsburg. He is having an argument on his mobile with his fiancée when, suddenly, he runs over a child. He sees the child′s body in his rear-view mirror, hesitates, brakes, but does not get out. He stays right where he is in his life - and simply drives on. It looks as though he might be lucky this time, the boy comes out of his coma and the police are looking for another car rather than his. Philip′s life continues.

But then the child dies. Shattered by her son′s death, Laura decides to find the perpetrator. She makes her way from one scrap metal yard to another, and from one workshop to another - all to no avail. With the help of her girlfriend Vera, Laura tries to pick up the pieces in her life. And then, by chance, she meets Philip.
Philip takes Laura under his wing, he tries to help her up again and give her support. All of a sudden, a feeling of security and closeness begins to evolve. But Laura has no idea with whom she is getting involved...