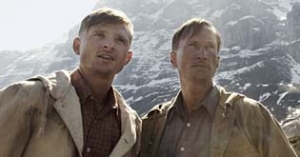 The first to scale the notorious Eiger North Face – in the summer of 1936 this is the dream of many mountain climbers from all over Europe. Toni Kurz and Andi Hinterstoisser, two cragsmen from Berchtesgaden, can think of no thing else. Being the first means not only a longed-for boost in their social standing, but also Olympic gold.

As they get ready for the climb, they are surprised to meet Luise, Toni′s childhood sweetheart, a journalist who has been sent to report on the conquest of the mountain with her fellow reporter Arau, a staunch Nazi. Toni still loves Luise, but she seems drawn to the charming Arau.

Nonetheless, the now distraught Toni begins the ascent with Andi, closely followed by the two Austrians, Willy Angerer and Edi Rainer. At first all goes well and they make good progress. But suddenly Willy is injured by falling rock, and then the weather turns. The four alpinists are forced to turn back, and it now looks like the mountain is going to win again…

With "North face" director Philipp Stölzl brings the true story of the tragedy of four ambitious mountain climbers to the screen. The myth of the Eiger North Face is here enhanced by the love story between Toni and Luise, which, like the ascent itself, threatens to end in tragedy.