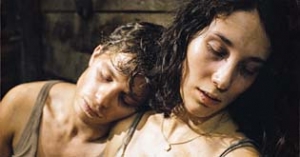 Wartime Germany, 1943. The Nazis want a Berlin "cleansed of the Jews".
Almost 70,000 Jews have already been deported from the capital of the
German Reich. The last transports to Auschwitz are set to roll in April. Any
day, any night, the Gestapo can arrive, drag the last remaining Jews into the
streets and drive them away on trucks. For 688 Jews this fear becomes reality.
Whether young or old, men, women, children, families, married couples,
pregnant women, strangers or friends, academicians, artists or workers,
wealthy or poor – it makes no difference anymore. They are all brought to
Berlin Grunewald – Track 17 – and stuffed into the waiting cattle cars. The
journey to certain death lasts six days. A struggle against unbearable heat,
thirst and hunger ensues. In their desperation some try to break out of their
relentlessly progressing prison hell, among them Henry and Lea Neumann
with their two children, an older loving couple, the cabaret performer
Jakob Noschik and the pianist Gabriella Hellmann, the physician Dr. Friedlich, a fearless young man named Albert Rosen and the young woman Ruth
Zilberman.

In this drama, produced by the legendary Berlin film producer Artur Brauner, Joseph Vilsmaier and his wife Dana Vávrová have vividly re-enacted the ordeal of these 688 Jews. This train really existed. It stands symbolically for the fate of the Jews of Berlin, in fact in all of Europe. Worse still: In reality it was not even the last train.