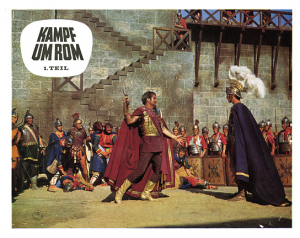 The Fight for Rome - Part I

First part of the two-part historical epic that was to become Robert Siodmak's last directorial work: Around 500 A.D. the once so proud Roman Empire collapsed. The Eastern Byzantium broke away from Rome and Italy was subjugated by the Goths King Theoderich. After his death a fierce power struggle breaks out between his two daughters Amalaswintha and Mathaswintha. When the crown council decides in favor of Amalaswintha, Mathaswintha persecutes the sister full of hatred. The Roman Cethegus sees this as his and Rome's chance: Informed of the Goths' plans by an informer, Cethegus now plays a game of intrigue with the sisters, who are obsessed with power and revenge.

A one-part abridged version of this part and the second part, "Der Verrat", was released in cinemas in 1976 under the title "Kampf um Rom" ("The Fight for Rome").