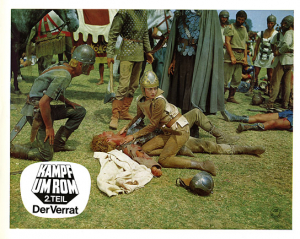 The Fight for Rome - Part II

Part 2 of the historical epic that was Robert Siodmak's last work as a director: The Goths besiege Rome, and the crown council decides to continue the battle. Only Witiches, the newly elected king married to Mathaswintha for reasons of state, and Totila, who loves Julia, the daughter of Cethegus, are in favor of peace negotiations. But Mathaswintha wants to take revenge on Witiches, who rejected her affection. In her wounded pride she becomes a traitor to her own people and informs the Romans about the Goths' plan of attack.

A one-part short version of this part and the first part was released in cinemas in 1976 under the title "Kampf um Rom" ("The Fight for Rome").