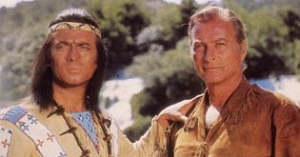 Last film adaptation of the in Germany very popular Karl May adventure novels of the 1960s: Bandits storm the US Fort Dawson. To secure the cash box of the fort, Major Kingsley hides the gold at a secret place in the Valley of the Dead. Shortly afterwards, he dies wounded in Winnetou's arms. When the court intervenes, it is generally believed that the money has been embezzled by the Major and that he has left for Mexico. In order to prove the Major's innocence, his daughter Mabel, Winnetou and Old Shatterhand set off in search of the gold. But the bandits also want the treasure.