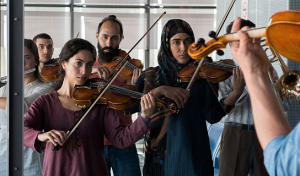 CCC Filmkunst’s latest feature project centers on events set in motion when an Israeli-Palestinian youth orchestra comes to Potsdam for a concert on the invitation of the German government. The idea for "Crescendo" is inspired by the example of the West Eastern Divan Orchestra which was founded in 1999 by Daniel Barenboim and Edward Said to bring young Israeli, Palestinian and other Arab musicians together in the spirit of peaceful co-existence as a way of contributing to a solution of the Middle East conflict.
This new film will show that music has the power to build bridges between people from different religions and nationalities despite the many challenges and obstacles.