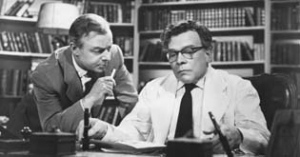 It Happened in Broad Daylight

The body of a murdered girl is found near a forest in rural Switzerland. The crime causes alarm among the population, since there were two similar murder cases in the past, which have never been solved. Jacquier, a destitute hawker, becomes the prime suspect, even though he was the one who led the police to the body. In opposition to police detective Henzi, his colleague Matthäi is convinced that Jacquier is innocent. But Jacquier has already hung himself in his cell. Matthäi remembers a drawing by the murdered child, which shows small, thorny pellets, a very tall man and a car. Going undercover, the police detective rents a gas station near the crime scene. As a home help, he hires young Miss Heeler, who brings her little daughter Annemarie along. Matthäi wants to use the child as bait, and eventually, Annemarie is one day approached by a tall stranger… The film is based upon a novel by Swiss author Friedrich Dürrenmatt.