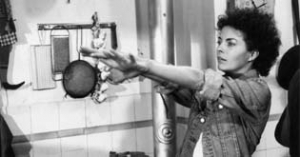 Based on the actual case of Marianne Bachmeier from 1981, the film tells the story of a mother who in a calm and determined manner shoots the murderer of her daughter seven times in the court room.The man dies at the crime scene. The media jumps at this tragedy and Bachmeier′s action is even spontaneously applauded by some. But soon, the attractive woman is cast under a pall when the media starts to look for "disclosing" details from her private life. The "Bachmeier case" caused ongoing discussions about revenge, justice, and vigilantism.