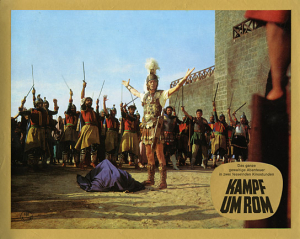 The Fight For Rome

Abridged version of the two-part historical epic, which turned out to be the last work of Robert Siodmak as director: In 500 AD, the once mighty Roman Empire has fallen apart. Byzantium has separated from Rome, and Italy has been conquered by Goth king Theoderich. Following his death, his two daughters Amalaswintha and Mathaswintha enter a bitter fight for the reign. When the crown council favours Amalaswintha , Mathaswintha is fuelled by hate for her sister. Cethegus sees that as an opportunity for Rome to seize power again, and begins to play off the two sisters against each other, leading two a fateful war and a family tragedy.