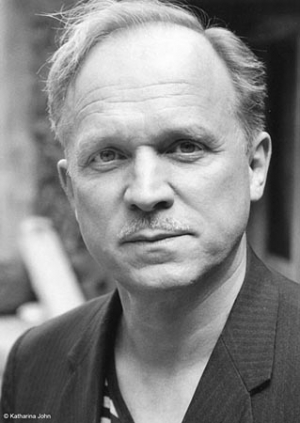 Born in Viernheim in 1957, Tukur grew up in Westphalia, Hesse, and Lower Saxony. After earning his secondary school certificate in Hannover and a high school diploma during an exchange year in Boston, he studied German, English, and History in Tübingen. He worked as an accordion player and singer before studying acting at the Academy of Music and the Performing Arts in Stuttgart from 1980 to 1983. He made his debut on the stage in 1982 and was hired for his first theater engagement in Heidelberg.

Tukur played his first film role in Michael Verhoeven's "Die Weisse Rose" (The White Rose; 1981/82). His part as an SS officer in Peter Zadek's 1984 production of "Ghetto" at the Freie Volksbühne Berlin won him acclaim from critics. From 1985 he was part of the ensemble at Deutsches Schauspielhaus Hamburg, where he received roles in "Julius Caesar", "Der Löwenjäger", and the lead in "Hamlet", among others. He was named "actor of the year" by the magazine "Theater heute" in 1986. His portrayal of the RAF terrorist Andreas Baader in Reinhard Hauff's "Stammheim" and his turn as "Felix" in the episodic feminist film of the same name directed by Christel Buschmann, Helke Sander, Helma Sanders-Brahms, and Margarethe von Trotta in 1987 added to his reputation.

Tukur has worked with the director Hans-Christoph Blumenberg on several occasions, playing Hans Albers in the docudrama "In meinem Herzen, Schatz…" (a.k.a. "Stadtmusik") and Conrad Veidt in Blumenberg's film portrait of Reinhold Schünzel, "Beim nächsten Kuss knall ich ihn nieder!". In 1994/95 he appeared as a German officer in another of Verhoeven's productions, a film version of George Tabori's play "Mutters Courage" ("My Mother's Courage"). In addition, he has been cast in numerous television productions dealing with German history, e.g. as Friedrich Engels in Dieter Berner's "Lenz oder die Freiheit" ("The Lenz Papers"), in the title role of the exiled communist politician in "Wehner – Die unerzählte Geschichte" by Heinrich Breloer, and as Henning von Tresckow in Jo Baier's "Stauffenberg" (Operation Valkyrie). Tukur has provided memorable portrayals of contemporary characters, as well, such as yuppie careerists in Peter Keglevic's "Das Milliardenspiel" and "Geschäfte", directed by Michael Schottenberg. In 2002 Steven Soderbergh cast him in a part in the Hollywood production "Solaris".

Not content to limit himself to acting, Tukur released his first record, "Tanzpalast", in 1990. Leading roles in Peter Weck's unsuccessful musical "Freudiana" (1990/91) and the musical revue "Blaubarts Orchester" (1993/94), which he produced himself, provided him with opportunities to show off both his musical and his acting talent. In 1995 he became artistic co-director of the Hamburger Kammerspiele along with the theater director Ulrich Waller. In 1996 he starred in "Einmal Casanova sein", a production combining silent film and live performance about a shy film pianist whose imagination transports him into the world on the screen. In 2006 Tukur was awarded the German Film Prize as best supporting actor for his performance in the Stasi drama "Das Leben der Anderen" ("The Lives of Others").

From the mid-2000s on, Tukur focused more and more on his work on the movie screen. After he won the German film award for his performance in the Stasi drama "Das Leben der Anderen" ("The Life of Others", 2006), he starred in many different films ranging from the ironic relationship movie "Ein fliehendes Pferd" ("Runaway Horse", 2007), the mountaineer drama "Nordwand" ("North Face", 2008), and the historical drama "John Rabe" that was based on a true story. In 2009, Tukur won the German film award as "Best Leading Actor" for his performance in "John Rabe".

In his next couple of films, Tukur repeatedly proved that as an actor he is constantly looking for challenging roles: In Michael Glawogger's film "Das Vaterspiel" ("Kill Daddy Good Night", 2009), he portrayed a German Jew who believes that he has found the man who had slain his father during the Third Reich after several decades. Michael Haneke's award-winning drama "Das weiße Band – Eine deutsche Kindergeschichte" ("The White Ribbon", 2009) also has political overtones. In the film, Tukur plays a landowner who fragrantly uses his position of power in a small village on the brink of World War I.

His next important roles Tukur played in the artist's biography "Séraphine" (2009) and the TV-movie "Gier" (2010) directed by Dieter Wedel, in which he played a charismatic impostor. In 2011, Tukur played a Frankfurt detective in two much acclaimed episodes of "Tatort" produced by Hessischer Rundfunk.In the month June of the same year, principal shooting of Caroline Link's "Exit Marrakech" wrapped. In the film, Tukur plays a father who invites his estranged son to Northern Africa, where their relationship is put to the test. His next project was "Freistatt", which won the Screenplay Award at the 23rd Emden-Norderney Film Festival in 2012. The same year, Tukur got rave reviews for his portrayal of German WWII general Rommel in the eponymous TV drama. He then starred as an alcoholic job headhunter in Bastian Günther's drama "Houston", which won a fellowship award at the 2013 Hofer Filmtage and was shortly released after "Exit Marrakech".

In 2007, Ulrich Tukur debuted as a writer with "Die Seerose im Speisesaal – Venezianische Geschichten". The collection of stories pays homage to Venice where Tukur lives with his wife Katharina John since 1990.

In Fatih Akin's "Aus dem Nichts" ("In the Fade") he was the father of a murderous neo-Nazi; in the controversial TV two-parter "Der Mordanschlag" (2018), based on the Red Army Faction murders of bankers Alfred Herrhausen and Detlev Rohwedder, he played the head of the Treuhand-Anstalt.

In the fairy-tale-like road movie "Grüner wird's nicht" ("As Green as it Gets", 2018), he played an eccentric nobleman, in the divorce comedy "Und wer nimmt den Hund" (2019), his fifth film with Martina Gedeck, he starred as an unfaithful husband.

Ulrich Tukur remained tirelessly active in the next few years as well. For example, he played a GDR functionary in "Der Überläufer" (2020, TV), a top manager in the business thriller "Jagdzeit" (CH/LU 2020) and a grieving father in "Meeresleuchten" (2021, TV). He also continued to playing the "Tatort" detective inspector Murot, in "Die Ferien des Monsieur Murot" (2020) and "Murot und das Prinzip Hoffnung" (2021).

On the big screen, he was part of the ensemble of the comedies "Es ist nur eine Phase, Hase" ("It's Just a Phase, Honeybunny", 2021) and "Die Geschichte der Menschheit - leicht gekürzt" (2022) in both of which he had smaller parts.