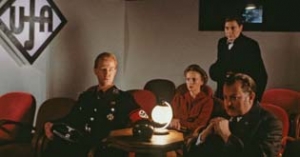 One More Kiss and He's Dead

Reinhold Schünzel, who was born in Hamburg in 1888 and died in Munich in 1954, was one of the most versatile, productive and brilliant actors, authors, producers and directors of German cinema. His best comedies as author and director for Ufa in the mid-1930s "Viktor und Viktoria" (1933), "Die englische Heirat" (1934), "Amphitryon" (1935), "Land der Liebe" (1937) - are equals of those by Ernst Lubitsch and Billy Wilder, who had already gone to Hollywood before Schünzel - a place he then fled to in the autumn of 1937.

Through 33 staged scenes, "Beim naechsten Kuss knall ich ihn nieder" sketches the portrait of a courageous, stubborn artist who constantly fell between the changing political systems in an extremely absurd manner: the portrait of a gambler, an actor, a disorderly man in orderly times. Any attempt at a lavish naturalistic air is deliberately abandoned. "Beim naechsten Kuss knall ich ihn nieder" is a filmic Kammerspiel, a series of thumb-nail sketches resulting in a portrait of the time: an unknown chapter of German, and also German-American, contemporary and film history.